Vienna, culture capital of Europe, Austrian Capital and a simply breathtaking city. We did so much In the three and a bit days we were there. We walked 76636 steps, ate and drank everything in sight and soaked in all that lovely culture. Vienna is the first place on our trip that we really are sad to be leaving, yet knowing we will return.

We accomplished so much in the time we were there that I couldn’t possibly cover it all in one blog without it rivalling a Stephen King book. Therefore I’ll be splitting it into 3 parts, a trilogy if you like. Each post will cover one of the days. You can view Part 2 and Part 3 by clicking on these.

We arrived at lunch time and since we were staying in an actual hotel for the first time on this trip, we decided to head there to drop off our bags. The public transport system in Vienna is really easy to navigate, the underground’s were very frequent and for what you got, not as expensive as you’d expect. For a 24 hour pass it was 8 euros each. And they went up to 48 and 72 hour passes. We bought the 48 hour one but would have been better off with the 72 as we ended up buying another 24 hours on the last day.

We were staying at the Trend Hotel Zoo Wien. As you can imagine, the hotel was near the zoo which is located in the Schönbrunn Palace Gardens. That’s right, a zoo in the palace gardens…

we dropped off the bags and set off in the direction of the zoo. In order to get there we had to navigate through the beautiful gardens which is not a complaint! The autumn colours made everything so pretty and we even got a little bit of sunshine. 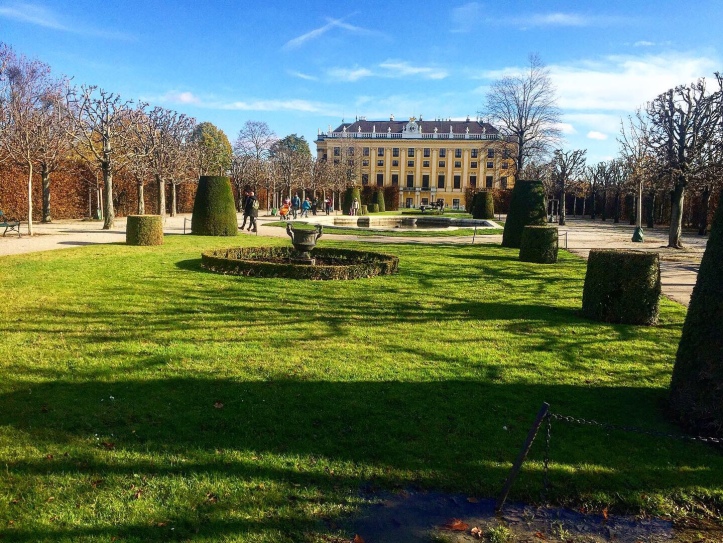 It’s fair to say we took the scenic route through the gardens as we kept getting side tracked by the different colours.

Eventually we found the Zoo. I understand that these are very controversial attractions and I do see both sides to the argument. However, in the day and age we are in a fear that I’ll never get to see most of the animals in the wild, and I love animals. Yes it is a selfish reason to force these creatures to be trapped in cages. But let’s not get bogged down with that. Anyway, here are some of my favourite animals from Vienna Zoo:

The rhino who was too hot inside his house and so he came out to roll around in the mud like a dog. 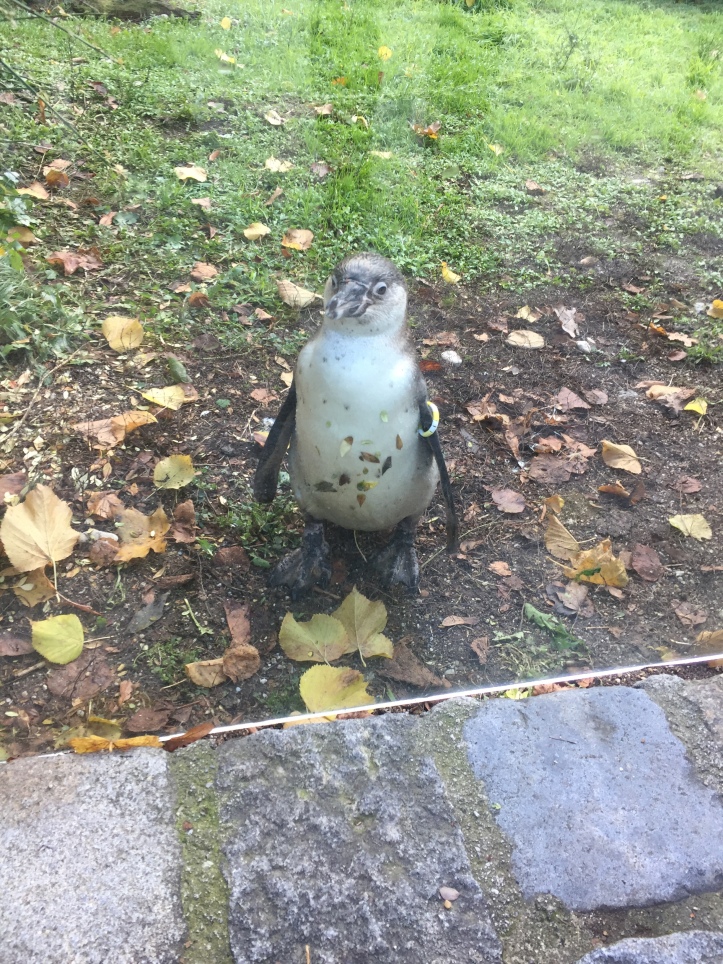 The penguin who was curious and came waddling up to the glass to investigate us.

The two hippos, who you can’t really tell were absolutely MASSIVE under that water! And yes there are two in there somewhere. 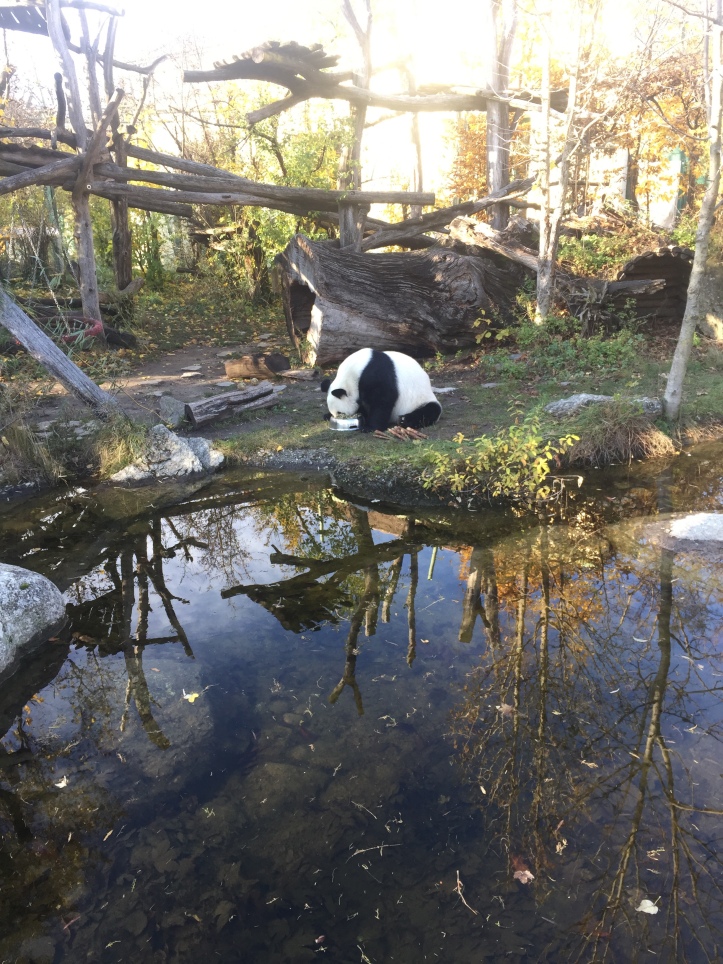 The two pandas (only one is photographed because there was a huge swarm of people around the other) who were both eating lunch when we got to them, this one was face down in his lunch.

The koala bear who woke up from his nap to judge people next to us who were being very noisy. Look at his cute judging face😍 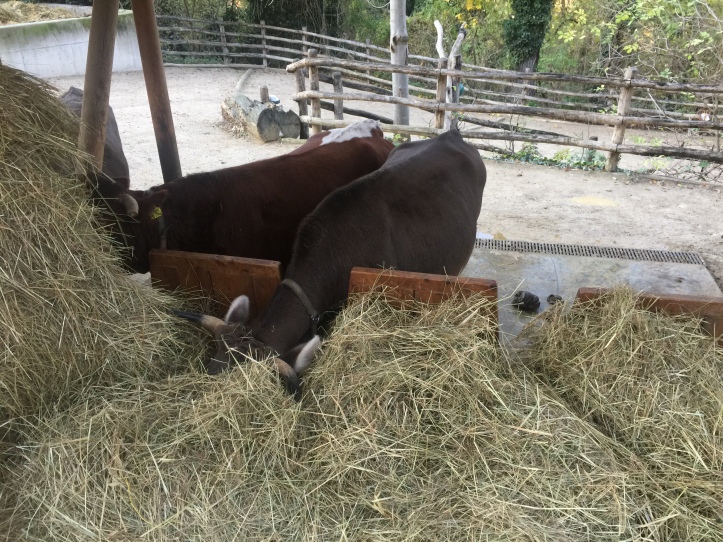 And finally, these really pretty cows who were picky about the hay they ate and kept flipping it about.

All in all, I really enjoyed Vienna zoo and if you enjoy watching animals do bizarre things like me, it’s a great place to go!

Once we had finished in the zoo it was after 3 so we could check into the hotel. So, back through the beautiful gardens we went, taking a different route to see the various fountains and statues that are located here. 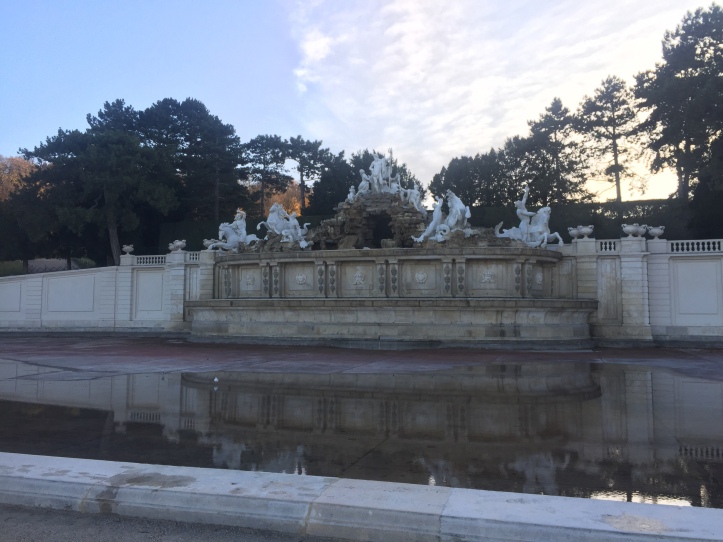 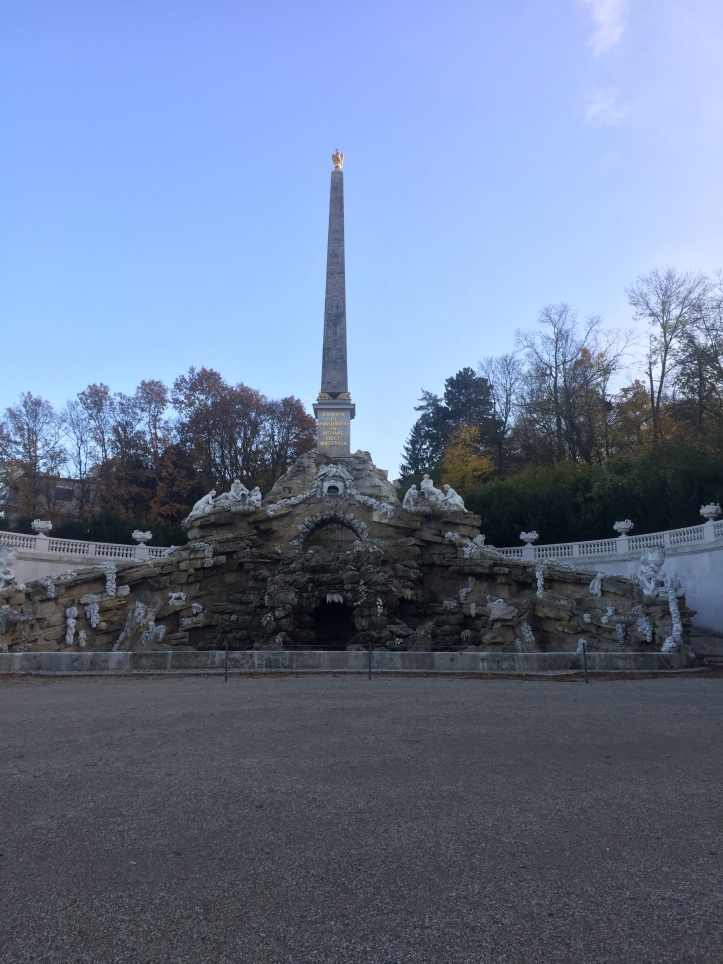 And crunching on all the crispy leaves as we went.

Our hotel room was nice and the bed was HUGE. We could both sleep starfished and not be touching each other. It was lovely!

After a quick change, we set out for the first time, into Vienna city centre. What a place. I can’t put into words how utterly stunning a city it is. It’s pristine, every building is unique and detailed and the people are well dressed and friendly. We got off the metro at Karlsplatz metro station and literally walked two minutes to see this:

Karlskirche, which is a beautiful building to look at, especially in the early evening as it lights up. The entire city is beautiful at night as we soon discovered. 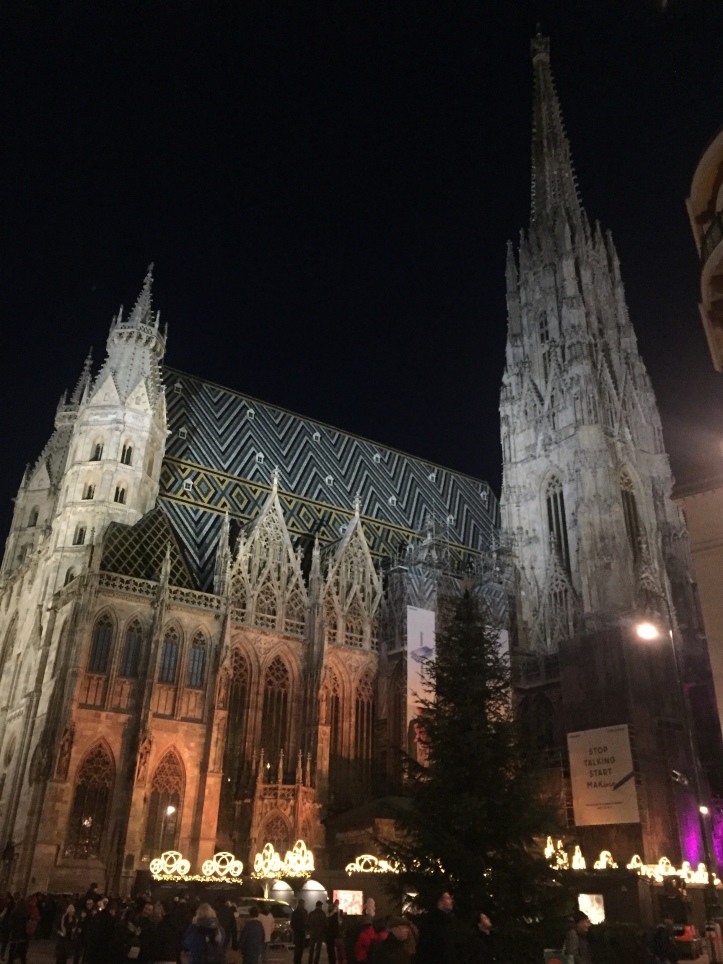 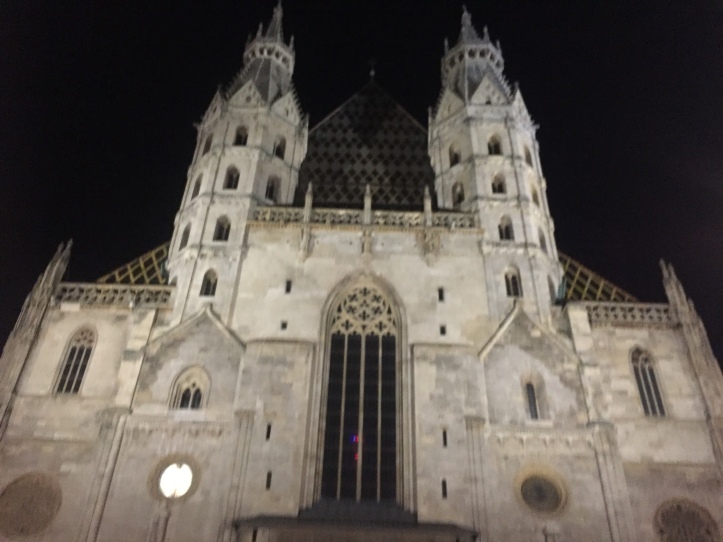 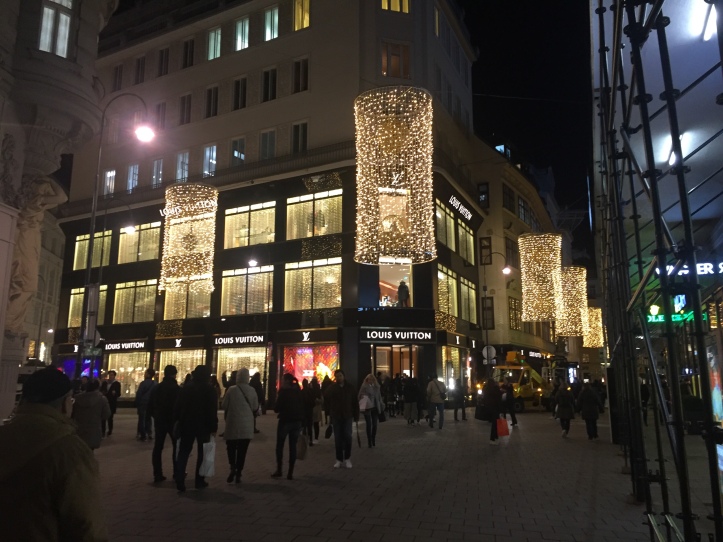 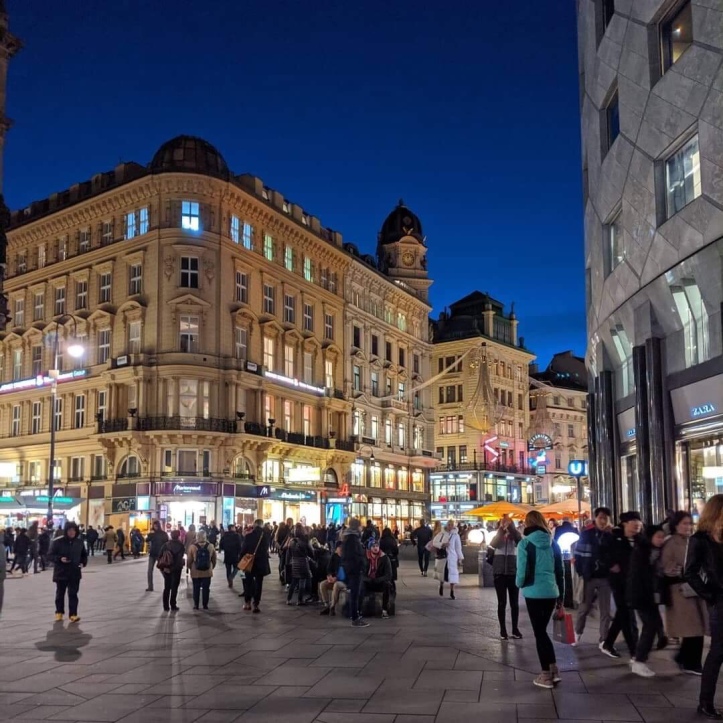 The streets were filled with people, street performers and everything was lit up. You could lose count of how many churches and monuments you walk past in this city. It’d also be really easy to go bankrupt here with all the luxurious shops. It’s clear why it’s the European culture capital.

After wandering the streets in awe for a couple hours, we decided on a familiar spot for tea, Hard Rock Cafe.

They’ve recently added a vegetarian burger to their menu, a plant based patty that I promise tastes as good as the real thing! So if you’re doing a ‘meatless monday’ the moving mountains burger from hard rock is a very good option!

After eating all the food in hard rock, we headed back to the hotel to rest up before another long day in Vienna.

I bet now your glad I split this blog up! The second instalment of this blog is now up? You can view it by clicking this: The Vienna Adventures Part 2