The capital of Croatia is a place we knew very little about prior to traveling there. In recent years the Adriatic coast line had made the likes of Dubrovnik a more desired destination, not to mention the game of thrones influence.

A lot of the blogs we read had actually advised people not to bother visiting the capital and go to the coastal cities instead. However, it has turned out to be one of the best places we’ve visited. This is partly because of the apartment we were in. 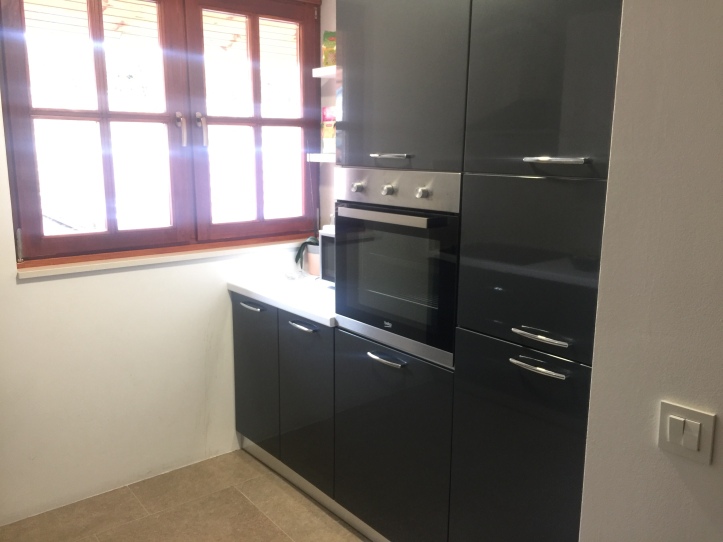 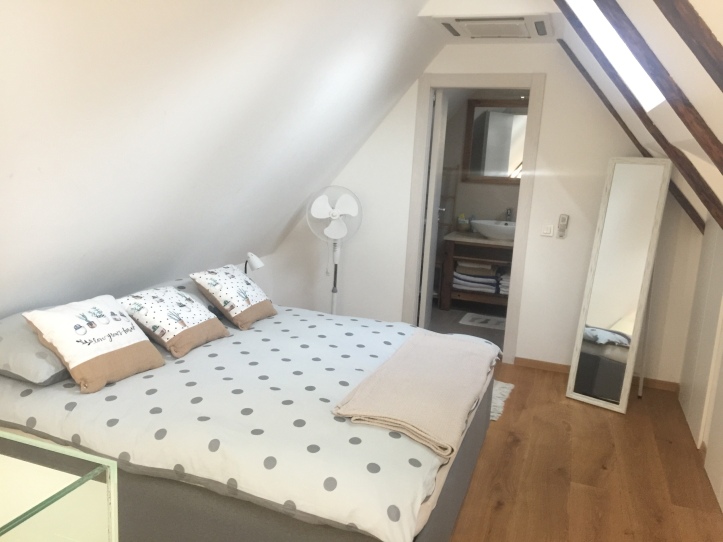 Not only was is decorated in such a lovely way, but it was so well equipped. It was a two story loft apartment with two bathrooms, the most comfortable memory foam mattress and a fully fitted kitchen. We even had a washing machine which allowed us to wash all our dirty clothes! There was an abundance of toiletries including lovely smelling shampoo and conditioner, bubble bath and a face mask. Anyone who has been backpacking knows the value of such luxuries.

The location of this place was just was ideal. Zagreb is sort of split into two parts, the upper and lower sections of the city. We were staying in the upper part and on a Main Street with a multitude of restaurants, cafes and bars with a diverse range of cuisines.

By the time we had gotten sorted in our apartment, it was lunch time and we were starving. We found a restaurant just a few doors down from where we were staying.

I went with tomato pasta (pasta is the only thing Europeans seem to be able to make vegetarian) and Shaun went with a burger. We also ordered a 7 beer tasting tray as the restaurant we were in brewed their own beers.

These beers were really nice and it gave us the chance to try loads of different ones. We found a favourite which we came back and had the following night.

As we were in the upper part of the city, this meant we were just a 2 minute walk from one of the main attractions, St marks church. 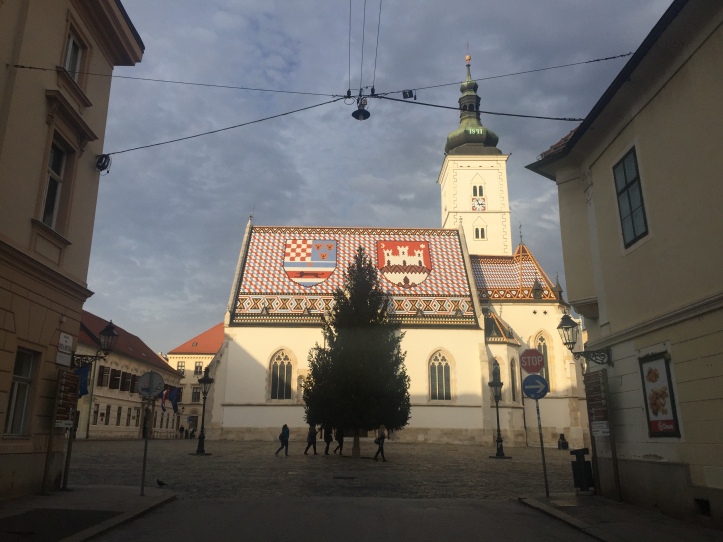 The roof of this church is just amazing.

It’s also high above the city which allows for views like this. 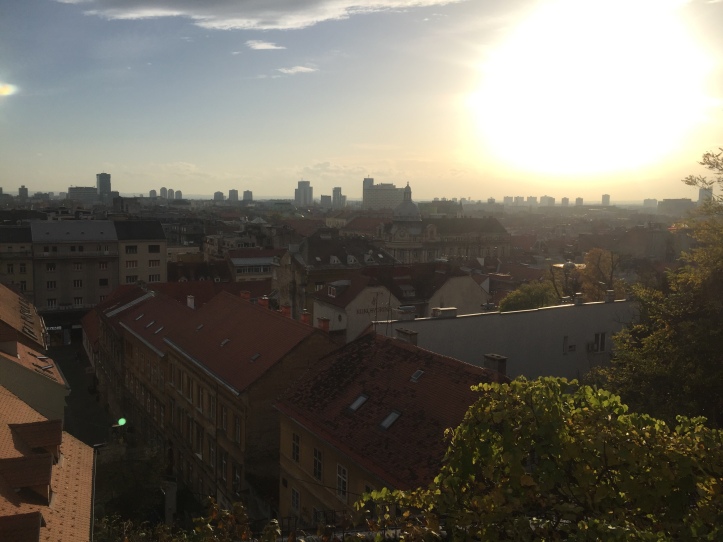 After exploring this upper part of the city, we headed down to the lower part to walk through the main square. On our way down we passed through this religious corner of the city. From what I understand, there was once a church here that burned down and wasn’t rebuilt fully yet people still come to pray. 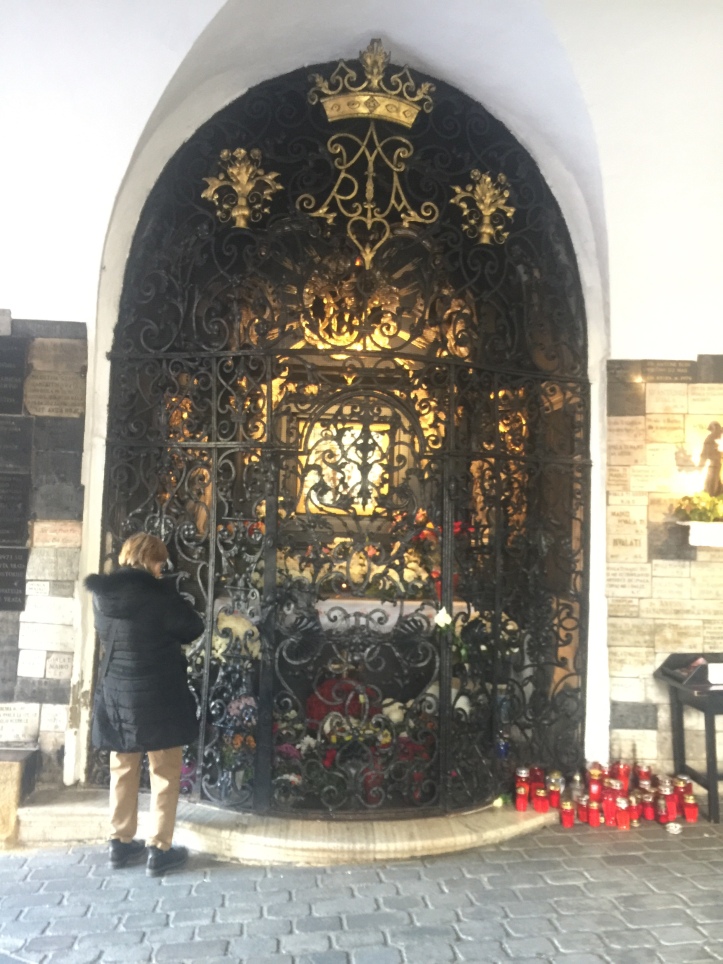 From the lower part of the city we decided we wanted some more high views of the Croatian capital and went up the cafe 360° and the view from up here was spectacular. It cost around 8€ each and was absolutely worth it, especially considering you can use that ticket all day.

We were lucky to have some sunshine this day and could see right across the city. The cafe itself wasn’t too bad either.

We could have sat here and took in the view for hours. But, we had things to do!

Our next stop was the torture museum, naturally. I didn’t take any photos from inside the museum as it didn’t feel right to do so. It is a small museum, and costing €8 each, you have to view everything in detail to get your money’s worth. However, it has a lot of exhibits in such a small space. We got a tablet which you used to scan the number of each item and it brought up loads of information so in that respect, it was well kitted out.

After this we went back to our apartment to get ready for the evening. England were playing a game of football in the Euros that night and we wanted to find somewhere to watch it. We headed into the lower part of the city and after walking around for a while, we found somewhere showing the game. So we watched that and had a few pints of local beer which was really enjoyable, especially considering we won 4-0.

After this we heading into the upper part to find some food. We settled upon a restaurant on the same street as our apartment and I got, more pasta while shaun had a T-bone steak.

The next day we set out later in the day than planned because of how comfy the bed was we just couldn’t get out of it!

The first stop we made was at the Nutellino bar for diabetes pancakes.

Pretty sure the sugar in these is still in my body but I have no regrets. They were delicious.

After demolishing these, we knew we had to go for a walk in order to justify the 3000 calorie breakfast and headed into some nearby park areas. 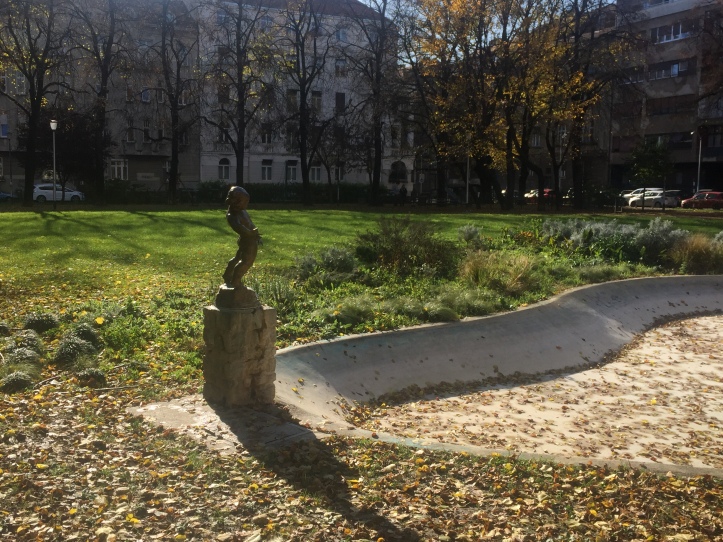 Yes, that second photo has a statue of a little boy pissing in an empty pond. No I don’t have an explanation.

We also had a walk to see the National Theatre in Zagreb. Which is a pretty building (but it’s got nothing on the Sunderland Empire Theatre).

The weather on this day was the best so far on our trip, and presumably the best we were going to have, so we wanted to really make the most of it. So once again we headed up to the view points around St Marks church to catch a glimpse of the city with even more sunlight.

We found this park which once was once home to a castle which can be seen by the remaining foundations in this space. We sat up here for a while before bench hopping our way along the viewing area back to our apartment.

After the huge breakfast we had, we weren’t massively hungry come teatime so we got a pizza and fries to share from the restaurant we had visited for lunch the day before, an of course a couple pints of the beer we had found.

The day after we had to be up at 5:30 to catch our bus to Ljubljana, so after this it was an early night for us.

Zagreb was a truly beautiful city made even better by the autumn sun that we had while we visited.